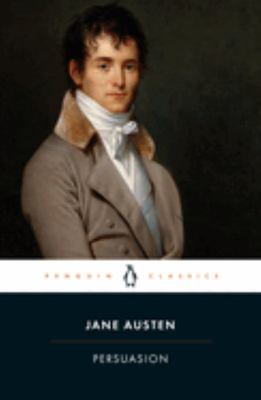 Her last completed novel, marrying witty social realism to a 'Cinderella' love story, Jane Austen's "Persuasion" is edited with an introduction by Gillian Beer in "Penguin Classics". Anne Elliot, twenty-seven and still single, seems destined for spinsterhood. In her youth, she broke off an engagement to penniless Captain Wentworth at the insistence of her friend Lady Russell, acquiescing to the demands of her class at the expense of her happiness. But when Wentworth returns from the Napoleonic wars rich and famous, Anne finds her affection rekindled - even though Wentworth seems more interested in Anne's friend Louisa Musgrove. Set in the fashionable societies of Lyme Regis and Bath, "Persuasion" is a brilliant satire of vanity and pretension, but, above all, it is a love story tinged with the heartache of missed opportunities. In her introduction, Gillian Beer discusses Austen's portrayal of the double-edged nature of persuasion and the clash between old and new worlds. This edition also includes a new chronology and full textual notes. Jane Austen (1775-1817) was extremely modest about her own genius but has become one of English literature's most famous women writers. Austen began writing at a young age, embarking on what is possibly her best-known work, "Pride and Prejudice", at the age of 22. She was the author of "Sense and Sensibility", "Pride and Prejudice", "Emma", "Persuasion", "Mansfield Park" and "Northanger Abbey". If you liked "Persuasion", you may enjoy George Eliot's "Middlemarch", also available in "Penguin Classics". "The most perfect artist among women, the writer whose books are immortal". (Virginia Woolf).

Jane Austen (1775-1817) was extremely modest about her own genius but has become one of English literature's most famous women writers. She is the author of Sense and Sensibility, Pride and Prejudice, Emma, Mansfield Park and Northanger Abbey. Gillian Beer is King Edward Professor of English at the University of Cambridge and President of Clare Hall.